END_OF_DOCUMENT_TOKEN_TO_BE_REPLACED

Smartphone, Netbook, Laptop – Which is the one for YOU?

In the last 5 years, there has been tremendous growth in the IT sector worldwide. Gadget manufacturers have paid close attention to the needs to customers and producers the right product for their needs and the price they would be willing to pay. Laptops for instance have taken over desktops for quite some time now and are available at cheap prices and also in great variety. Besides laptops, netbooks and smartphones are also increasing their market share in competition with laptops to fulfill your needs. However, before you go out to buy one of these gadgets for yourself, do a self evaluation of the factors listed below to figure out which one is for you.

In the real business world, there are complex tasks which need to be done on word or large excel sheets or even at times power points to be made for presentations. This might require some specific features. If we look at laptops then they might be the ideal choice for doing any sort of corporate work, due to its high resolution screen, large hard disk capacity, higher ram and other various features. Though the downside of it would be its high cost as we could buy a smartphone or a netbook for a cheaper price. Netbooks on the other hand would be not be prefffered for doing any coproate work as they are often cramped and small in size and the best use for them is made while travelling. Lastly, smartphones would be the last preference of any individual to do any corporate work on. It would give the person a tough time due to its small screen, small keypad, slower operating system etc.

END_OF_DOCUMENT_TOKEN_TO_BE_REPLACED

Announced in February 2009, the Nokia 3G netbook is the first stepping stone of Nokia into the word of computing and finally the details of the netbook was launched in September 2009 and was later shipped out.

The Nokia Booklet 3G is an exceptional netbook with a sleek aluminum body and a glossy black finish, which makes the netbook a combination of beauty and stability, something which very few netbooks are actually capable of. The netbook weights just 1.25 kilograms and yet it is something that is very durable and reliable. It has a remarkable 10.1 inch screen, with a display of 1280 x 720 pixels display and provides users with an enriching visibility. The keyboard is also something that is smooth, easy to use and flexible.

The Netbook 3g has a 1.6 gigahertz Intel Atom Z530 processor and a GPS, with  Wi-Fi, Bluetooth and the old beloved modem, which makes this device’s connectivity an all rounder. Not only this, but the netbook has SIM card support, HDMI 1. out for HD video and 3 USB 2.0 ports. The only setback to this beauty is it’s limited hard disk which apparently comes in just 120 GB and a mere 1GB RAM, thus making the netbook not very effective for any other work besides the regular spreadsheet, word files. END_OF_DOCUMENT_TOKEN_TO_BE_REPLACED

Nine Things Mobiles Have Made, Or Will Make, Obsolete

Mobile Industry is growing day by day and the reason for this is the variety of features that are being offered by these mobile phones. Following are the few things that have become outdated because of mobile phones offering the similar functions:

END_OF_DOCUMENT_TOKEN_TO_BE_REPLACED

On Tuesday evening Google has announced the forthcoming release of the Google Chrome operating System. It is a new open-source operating system which is primarily designed for netbooks but it is also for desktop computers. Yet this is the most direct attack made by Google on Microsoft.

After Android, Chrome OS is Google’s second operating system. Android is the mobile device operating system that has been introduced by the company in late 2008. That’s also about the time when Google introduced its Chrome Web browser. An extension of Google’s browser code is Chrome OS.

Netbooks are the future of computing

A netbook is just that you take the internet and notebook computers, then put them together, and then the thing that you will have in your hands is called as a netbook.

In recent years the Netbooks have gained much popularity and it is due to the fact that now users are more interested in using Web-based applications instead of getting attached to computer-based software. With the advent of iPhone it has become common to having a mini-computer in your hand. The Apple’s iPhone comes with one drawback and that is that it has no keyboard. Netbooks’ have become a hot consumer-electronics product just because of its keyboards and bigger screens

The Netbooks screens could be as small as five inches or as large as 13 inches and primarily they are used for sending e-mails or to browse the Web. The weight of the devices is no more than three pounds and they rely on slimmed-down Windows XP or Linux operating systems. The cost of Netbooks is less than laptops. Usually laptops come with more software and full-size keyboards.

A humanitarian project called One Laptop per Child has give rise to the netbooks. This project was the idea given by a nonprofit group who has aimed at supplying $100 laptops for children living in the remote third-world villages. The project however encouraged competitors to bring their products to the market and then inexpensive notebook computers, including Psion’s now-discontinued netBook brand, and the Palm Foleo started arriving in the market. In 2007, Asus also started selling the popular ASUS Eee PC and Dell and Hewlett-Packard Netbook products were also introduced in the market.

END_OF_DOCUMENT_TOKEN_TO_BE_REPLACED

Dell while indication that the GPS and location features that have gained popularity on smartphones and navigation devices are now migrating to netbooks, said that it has made plans to start offering a location service-enabled application for its Dell Mini 10 netbook family. 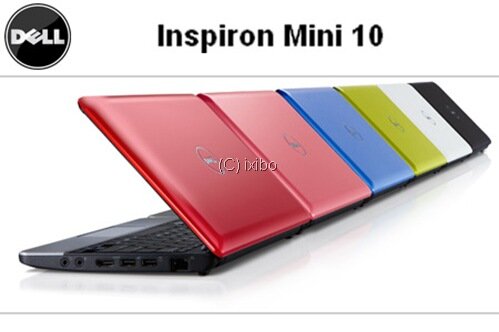 In a blog, it was said by Dell that it will offer its Dell Wireless 700 location solution that will begin from next week. A combination of technology is being used by the system, from Broadcom A-GPS and Skyhook Wireless’ Wi-Fi position applications.

END_OF_DOCUMENT_TOKEN_TO_BE_REPLACED

There was a lot of talk about that how Windows are taking over Linux on netbooks. But when in 2007 Asus launched the Eee PC 701 supported by Xandros Linux that made false all 1st talks about down going of Linux by Windows, now its being proclaimed by open source enthusiasts that finally netbooks will help Linux to make it a mainstream consumer oriented operating system. Computer making companies gets so less cost on making these and for consumers it’s having almost same functionality as they gets from Windows or OS X.

That’s why Microsoft offered netbook makers the ability to license Windows XP on less rates than its normal price because of that now many of mini-laptop running Windows XP for just a few bucks more than Linux model. It was major step taken by Microsoft in market and in result now almost 80% are running Windows XP.