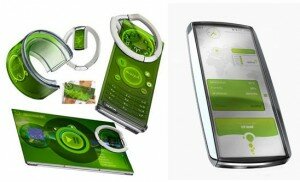 Apart from the amount of energy that is used to charge cell phone (smartphones or other) the power to transmit calls, text/media messages and data via wireless carrier networks such as Bluetooth, infrared etc require extra power. Furthermore, all the wireless data sending networks transmit a remarkable volume of signaling traffic in order to route calls and other data to the relevant customers.

This great energy consumption adds more to greenhouse gas emissions. According to the Green Living Blog published in the UK Guardian about the carbon footprint of mobile phones and their usage:

“The footprint of your mobile phone use is overwhelmingly determined by the simple question of how often you use it.

“One estimate for the emissions caused by manufacturing the phone itself is just 16 kilograms of carbon dioxide emissions (CO2e), [similar to the carbon footprint of about] 1 kg of beef.

“If you include the power it consumes over two typical years [of use,] that figure rises to 22 kg. But the footprint of the energy required to transmit your calls across the network is about three times this entire put together — taking us to a best estimate of 94 kg CO2e over the life of the phone (47 kg per year).”

You should be aware that all mobile phones bear an eco image issue. Almost all the mobile phone manufacturers, U.S, wireless carriers and other office supply or electronics dealers have now started providing recycling programs. These programs are offered both in-store and mail-in. in this program they will take the used mobile phones back from their customers for free of cost and recycle the materials of mobile phones as much as possible.

It’s better to green your cell phone than to let them be the part of landfills. But green color is also the color of currency. You can sell your mobile for reuse purpose by using different methods. A cheaper and greener option is to purchase a used mobile phone instead a new one. If you don’t count the latest features and can live with any mobile phone then you can get a save your money on purchasing used mobile phone.

If you count the new technology and want to have a latest model then you can buy any of the latest models that claim to be greener. For instance, Blue Earth will be released by Samsung later this year slated for U.S. features a built-in solar for battery charging. Likewise, several other phones such as, the LG Remarq is made up of recyclable materials.

CNET also presented a comparison chart of a number of leading green phones. Moreover, the UK wireless carrier O2 also published its first eco ratings of a number of popular cell phones. This effort appeared to be controversial due to the refusal of Apple and Research in Motion to take part in this rating.

However, according to the report of ThinkQ, RIM states that it will take part in this rating next year. Whereas, Greenbiz.com raised the question that why several smartphones took part on the O2’s eco ratings.

To make your phone greener, use the text message option as the main communication. Moreover, to make phone calls use your landline phone instead of using mobile phone.

Henry - who has written 15 posts on ixibo.

how green in your wireless carrier? , How to make your cell phone greener