Goo.gl, the Google URL shortener, is counted as the most stablest, shortest and  fastest URL shortener introduced by Google last December. It originated in competition with Google’s Bit.ly, and can shorten any  link on the web.

Though there are many URL shorteners on the web available with plenty of features, but the Goo.gl appears to be most reliable and fastest URL shortener on web. People when choose Goo.gl to use, know that it is worth working, and it will definitely work in great way. As the Goo.gl provides features as well. When you shorten any URL with Goo.gl,  the shortened URL is safe from all malwares and viruses that can affect your URL content. The basic quality of Goo.gl is mainly based on three objectives. 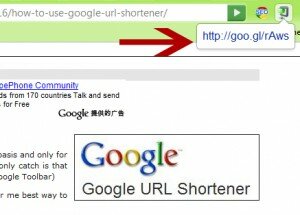 Goo.gl shortens the links under strong automated security detection used as behind the scenes of Gmail.

The Goo.gl URL shortener has been always processed since its origination to make it most reliable, stablest and fastest URL shortener.

Goo.gl URL shortener has caught up double the speed in last nine months.

Apart from its built in characteristics to make it unique and most usable URL shortener, Google has made Goo.gl stapled with other exciting features as well. Unlike any other URL shortener, Google has simplified the use of Goo.gl. You can check the list of all the URLs that you have shortened using Goo.gl when you sign in to your Google account. You can check the ‘details’ in the details options of any particular shortened URL which includes the top referrers, visitors profiles, real-time analytics data, public and the traffic in that current time.

Hmm,  no API is mended till now. But, Goo.gl is accessible through extensions for Firefox and Google Chrome. An API is expected lately from Google that can let you shorten URLs, expand them, and allows you to view all analytic directly from your own application.

Goo.gl URL shortener makes it easy to share links. It separates the important URLs from the common URLs that are less use.  Recently, Twitter also followed up by building its URL shortener and Facebook is testing one for its creation behind the screen. Though there are so many competitors shattered through out the web, Bit.ly was the one who picked up the race and is found to have widest traction among all of them.

batool - who has written 53 posts on ixibo.