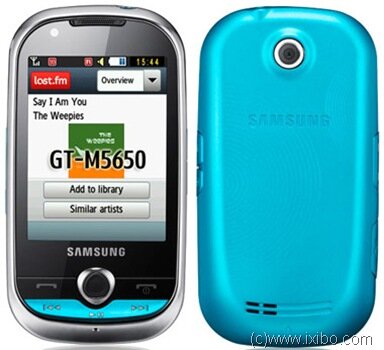 
There is also a 3.5mm jack and microUSB port present in the phone. However, the microSD slot is hidden under the battery, which makes replacing the expansion card relatively a harder task.

The interface is a standard TouchWiz featuring motley widgets, themes and main menu of multiple pages. Unlike the Corby, there are applications for social networking that are accessible via dedicated widgets. The programs are Java-based and can be a little sluggish, but provide basic functionality like uploading pictures and making comments easy.

The camera features a 3-megapixel sensor and lacks flash, but it does offer various other options, such as smile detection. Pictures do have a better quality as compared to those pictures taken with the Corby.

Samsung Lindy M5650 has some great music-related capabilities. The device has hardware buttons for playback control, but the audio player lacks software keys for that.

According to the manufacturer, the battery is powered to provide up to 3hrs of continuous talk time and has the capability to keep the phone operational for about 300hrs in standby, both on 3G networks.

As a whole, the Samsung Lindy M5650 is one of the most likeable mobile phones available in the market today. This is mainly due to the pleasing color scheme that will surely attract a large number of youngsters.

The addition of 3G and WiFi support also make the browser and social networking functions quite more usable. However, one major shortcoming of the device is its limited video capture and playback capabilities. But keeping in mind the style and the price, it is definitely a great buy.