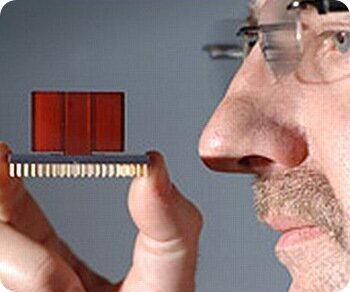 
Different types of proteins have different property to attach to various receptors, though binding with some receptors more than with others. The team’s task was to identify those binding properties for different proteins. For this purpose the team used a molecule beaming a fluorescent signal. The molecule attached to the receptor particles and then it was replaced by protein molecule when the latter bound to the receptor. As more the fluorescent molecule was displaced, the more light produced. After that the results were analyzed by the computer.

While conducting these experiments the scientists performed tests with 56 different proteins and proved that the signals produced by the receptors could be further used to distinguish among various proteins. The ‘nano-nose’ produces exact result in 96 of 100 cases during these tests.

Mr. Rotello is much hopeful about this accomplishment, as it is able to be used not just for smelling out proteins specific for a disease, but it has also become possible with it to see the difference in the normal combination of proteins in the human body.

After conducting a series of tests using the blood of sick and healthy animals, the scientists were able to identify changes in serum. They do not stop here and they are still trying to make this ability statistically stable. Rotello has further planned to make the ‘nano-nose’ identify different kinds of cancer cells and other diseases.

This sort of nose device, sniffing out illnesses is not a new thing in the world of science and technology, as in the past also devices were developed capable of detecting small molecules; but we can say that the Rotello’s system is the first one to detect large and complicated molecules.