Tech Blog of The Day: A Hell of a Site

Sriraminhell.com is home to a promising blogger and young IT Professional Sriram Sridharan. He is related with Cellular Industry. Brief look at his about me section of blog, it revealed that He is inclined to blogging about technology due to his educational background. 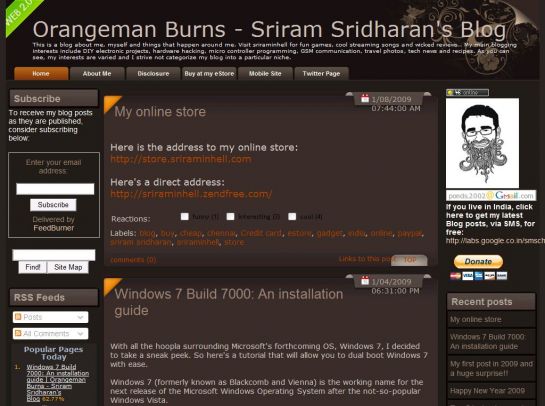 At first impression the blog opens quite quickly. It has been decorated with a nice black Web 2.0 theme Which gives it a nice tech feel. You will also notice that It uses blogger as the CMS engine which is not so common among self-hosted blogs.

The Blogger is quite active and responds quickly to comments on his blog and try to engage visitors in order to help them which is also a great plus for this blog.

Blog seems to have kept its focus on its main theme.  On positive side, with reviews of other blogs and engaging other blogger’s with guest posts he is moving toward the right direction.

Navigation around the site is quite easy with recent comments, recent posts and archive widgets in the side bar. Page links are displayed above fold prominently.

There is however a problem the related post plugin he is using.

I particularly liked the writing style of this blogger. It is very frank and conveys the message with force and conviction. Its easy to read as well.

The Full blown advert of his store at top of site is quite annoying. Visitors have to scroll down to reach to content of the post. He should consider moving this advert to a different place. i.e. bottom of the post.

PS: Probably he has taken care of it using some kind of cloaking method or plugin so that only targeted audience see his adverts.

It is a Google PageRank 4 blog. which is quite an achievement. It has more than 1200 backlinks as per yahoo. including a backlink from Wikipedia.

Although Blog has been submitted to Social bookmarking sites like digg, reddit and stumble and it also has yet to hit big time.

Traffic seems to be quite low compared to other sites in the same category. Most of the traffic in recent times have arrived from india followed by USA.

Although all his blog is awesome but we especially liked the post  that describes in detail about Installing an Operating System on a USB drive. In fact it is the best tutorial about installing DSL dam small Linux on USB.

Final Verdict and Some Suggestions

The blog has the potential to be reach masses provided the blogger gives more time to it. we have rated this blog as 6 out of 10.

Blogger needs to work on and improve in following areas

He needs to write more of good content like the featured Post above. he needs to stay focused and post more often. he should avoid posts like windows-7-build-7000-installation a quick and good response to the new product. But the article seems to be very lean and casual. It is evident that blogger did not work hard there or he was pressed for time.

Our Editorial Team at ixibo.com wish you luck and success in his great blogging journey.

2 Responses to “Tech Blog of The Day: A Hell of a Site”